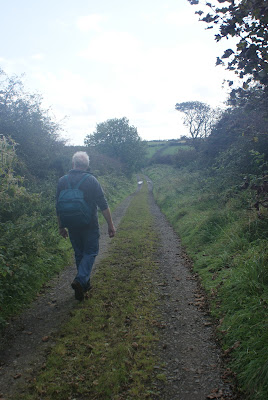 Leaving the witch thorn and stories of fairies behind, Ray Cowan and I journeyed on towards the next landmark - a hill rising to over 600ft above sea level, which has traces of a ring fort on its summit. Maybe this 'Porg Hill' was a 'fairy forth'? 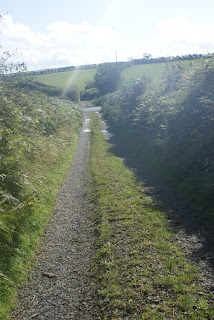 Walking down towards the bottom of this wide, open  stretch of the Cassie, a new (early 20th century) road cuts across our path. This new road runs from the Beltoy Road to Ballycarry and gives access to dozens of farms that once could only be reached from the Cassie. 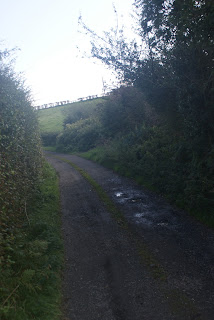 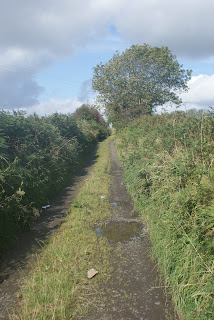 But once over the road, we continued straight on, until we started to climb another short rise towards Porg Hill on the right.
The 'new' road just crossed is not shown on the following 1860 map of land holdings, but on the map it can be seen that the fields on the Thomas Hoey farm  (plot 17) run from the Cassie at the witch thorn right down to the house that was the Hoey/Hay farm for generations. This farm belonged to Bob Todd's great, great grandfather as described in the last post. You can see from the map that the Hay family farm was originally accessed from a side lane off the Cassie that originally went on to and through another six or seven farms (including the ancestral home of President Andrew Jackson). 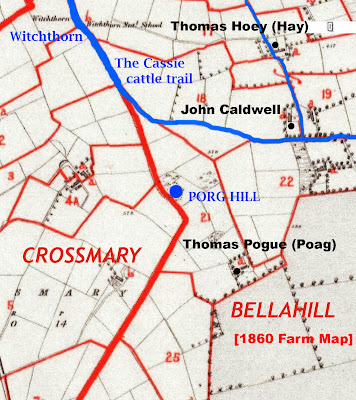 This farm (17a on the map) is still called called 'Beech View', and has been in Hay family hands for over 400 years - as the following account sent me by Bob Todd testifies (it was written as part of a book 'The Hoy's of Maryland' by a Captain Charles E. Hoye, following a visit by him from the US to the Beech View farm which - in 1938 - was owned by Isaac Hay):

"There is a tradition among the Hoys in County Antrim that their ancestor came from Scotland as groom in charge of John Dalway's horses, sometime between 1578 and 1606. As a groom, most of his duties were at the castle and bawn (barn), but in time he leased from Dalway a farm about a half mile northeast of the castle on the hill overlooking the Muttonburn valley. This farm, or part of it, now belongs to his descendant, Isaac Hoy, and the present Hoy home here was probably built by the original Scotch settler.The Muttonburn (burn = creek) flows  south into Belfast Lough northeast of Carrickfergus, draining part of Dalway's  Manor. From high ground near Ballycarry the beautiful little valley is in view, a bit of the Lough and County Down in the distance.
During the last century Hoys were numerous in the Muttonburn Valley; so numerous and so devoted to such Christian names as James and John that some of the descendants of William and Alexander Hoy changed their name to 'Hay'."

The map shows that the farm between the Hay's and Porg Hill (18) was owned by John Caldwell in 1860, and indeed the Cassie runs right through this farm. Although Ray Cowan's mother was a Caldwell (and indeed it was her family of Caldwells that bought out Dalway's Bawn and farm about 1900, after Marriott Dalway left for Australia), it appears there were two separate families of Caldwells in Bellahill, and this John Caldwell may not have been directly related to Ray, actually belonging to the Bellahill 'Calwells'. Today these families are distinguished by the spelling of the surname (Calwell and Caldwell) but like many other family surnames in the area, the older records often spell the same person's surname in different ways. Anyway, for Ray, this stretch of the Cassie absolutely 'hotches' with family history.

When we reach Porg Hill, the Cassie sweeps round to the left, and to investigate it properly a diversion is needed through a gate to the right. 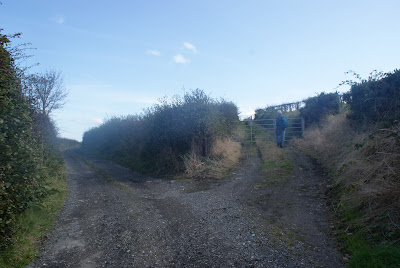 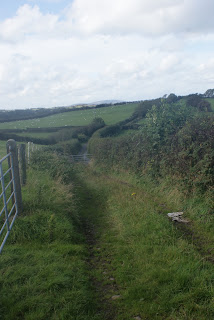 Looking back from past this gate that leads up onto Porg Hill, we can see the line of the Cassie running back to the site of the witch thorn on the horizon.

It certainly looks as if the Cassie originally came up over Porg Hill on the side track we are now on.
Approaching the summit of Porg Hill, the outline of the raised platform of an ancient earthen fort can be seen on the horizon ahead. 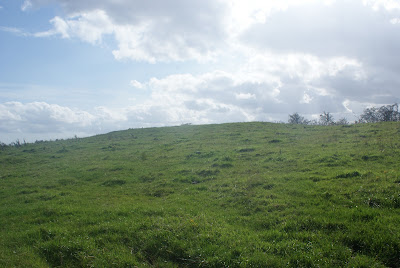 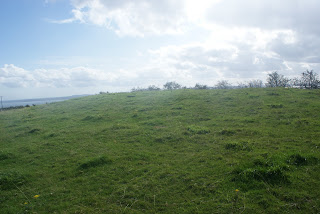 And from the top, the remains of a 1,000 year old earthen ring fort are faint but unmistakable. Remarkably, this is not a recognised ancient monument site - or at least I couldn't find any record of it in the Archaeological Survey archives in Belfast. But looking at it in from the air in the satellite photos, again a circular shape is visible.

Porg Hill sits at the center of the Poag farm as it was in 1860 (Thomas Pogue 21 on the map). There were two Pogue (Poag) farms in Bellahill in 1860, both off the Cassie and owned by two brothers, William and Thomas Poag. Although the Poag farm at Porg Hill was owned by Thomas Poag in 1860, it was a James Poag living here in the 1830s when his account of the witch thorn was published (see previous posts), and in 1833 when the Ordnance Survey Memoirs for Bellahill mentions the fort on Porg Hill:

On an eminence in the above townland, and holding of James Poag, there stood a fort 21 yds. in diameter. Some traces of the parapet is still visible." 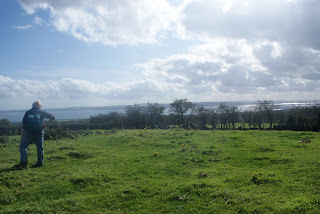 But if anyone should doubt that this was an important strategic fort site in ancient times, they should do what Ray and I did, and stand in it to survey the spectacular views of the sea - from Belfast Lough right round to the Irish sea and across to Scotland.

This is the only site I know of in the region where there is such an unbroken view of the entire coastline. The following views take you in a panorama from Belfast Lough to the right, panning left towards the Irish Sea. In the first view, Belfast sits at the head of the Lough, right in the center: 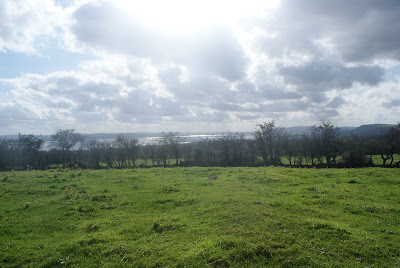 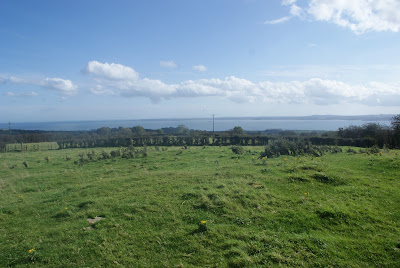 The above photo is looking across the mouth of Belfast Lough, towards County Down. The rough remains of the fort wall are in the foreground.

And in the next photo, the Irish sea can be seen continuously from the mouth of Belfast Lough to the right, to the open sea towards Scotland to the left. 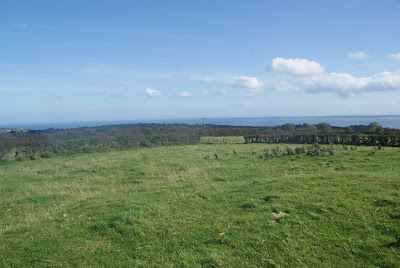 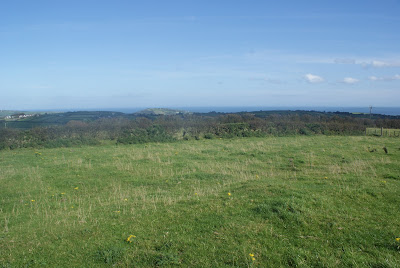 Further left still, and the Irish sea view is only slightly interrupted by the tip of Muldersleigh Hill in the center of the above photo. Muldersleigh Hill, beside Whitehead and the Gobbins Road in Islandmagee, being the final destination of the old cattle trail before the cattle were shipped to Scotland.


Once again I am grateful to a Canadian descendant of a Bellahill exile for filling me in on much of his family history around Porg Hill. This time it is Barry Poag who I have mentioned before. His great grandparents were William and Mary Poag in the center of this family photograph taken in Bellahill about 1900. 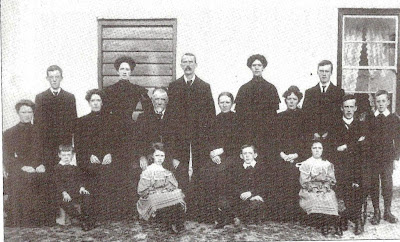 Considering that both Canadian contacts mentioned in this post - Barry Poag and Bob Todd - are descended from the Poag and Hay family farms on this part of the Cassie trail, I am very grateful that they have shared so much of their own family history researches of Bellahill with me from the other side of the Atlantic. But the hub of this genetic wheel of local knowledge is, of course, my traveling guide and old school chum Ray Cowan, whose great, great grandfather John Cowan's farm (not to mention those belonging to the Caldwells and other closely related families in Bellahill), was also part and parcel of the historical context of the Cassie. Yes, the landscape itself speaks, but not so much as the memories of the families that lived in it.

Just below Porg Hill, at the bottom end 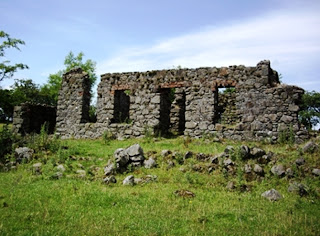 of the old Poag 20-acre farm, are the ruins of its farmhouse - marked as 21a on the 1860 farm holding map. Again I am grateful to Barry Poag for sending me this photo of the ruins taken when he visited the site in 2008.

So, back to Porg Hill. On the ground, and from the historical records, it is a spectacularly important strategic fort site. 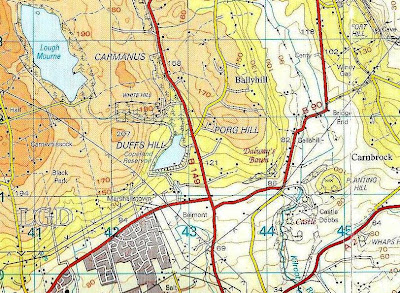 The modern map above shows how it dominated the lowland coastal approach of the old cattle trail that had - from the earliest times - lead up to the uplands and commons behind Carrickfergus. As a defensive site, it dominates the Dalway's Bawn 'cattle fort' that replaced it 400 years ago. The broader context in the east Antrim coast can be seen in the next map. See if you can trace the Cassie from the south of Lough Mourne past Porg Hill and down to Bellahill and Dalway's Bawn on this map and the one above. 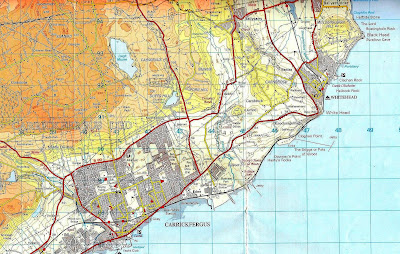 Some time ago, Barry Poag asked Ray and I what the origin of the name 'Porg' was, and if it could have been a corruption of 'Poag'.
Well, I think both of us agree that that is the case. There is no Irish Gaelic, Old Norse (Viking) or Ulster-Scots etymology for 'porg' that makes any sense. Even more convincing is the fact that the name does not appear on any old map or document before the late 19th century - by which time it had been firmly located right in the middle of the Poag family farm for at least a century! It is easy to see how a non-local map surveyor might have misheard 'Poag Hill' for 'Porg Hill'.


But as for fairies on Porg Hill? So far, not a whisper!

Posted by Philip Robinson at 12:31 No comments: