CLIMBING DOWN FROM THE OLD ORANGE TREE 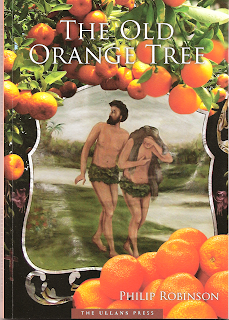 So the Old Orange Tree was published last year by the Ullans Press - with a change to the cover design as previously posted. This consisted of giving Eve a new tress of hair to satisfy the publisher's sensitivities! A bit daft methinks, as the original folk-art is from the banner of my brother's 'Black' preceptory in Carrickfergus - and it gets an annual public airing in the streets of respectable east Antrim towns without having had a single word of complaint in the past 200 years.

See USLS website for details: www.ulsterscotslanguage.com (that is for details of the book - not the 'Black' parades).

Well, what now? And apologies for the long silence! A 'wee scare' as we like to refer to cancer, followed by a 'wee procedure' (or rather two of them), are the reasons for my intervening silence. But now, with that and the subsequent treatment behind me for the time being, it is time to climb down from the Old Orange Tree and move on.