The year of the crowning in Eden 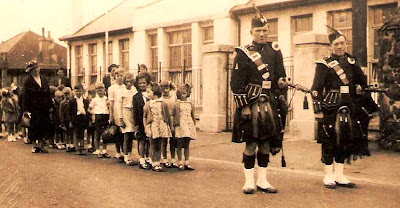 The 'East of Eden' chronicles took an uncanny twist this week. I had just posted the last blog about Eric Glynn and myself exploring the cowboy territory around Dalway's Bawn in our Davy Crockett hats. Next stop, I thought, had to be Dobbs's Plantin - that wooded glen in the demesne of Castle Dobbs that was our Sherwood forest (with Robin Hood the role model rather than Davy Crockett). Or maybe the next port of call should be Kilroot Orange Hall (home of Kilroot True Blues LOL 1544, the Star of Eden Pipe Band and our 'juvenile' lodge). The Orange Hall was built in 1898 at the eastern end of Eden village on a plot donated by The Dobbs family of Castle Dobbs, and it sits immediately across the Copeland Water in Kilroot Parish.

So in the hunt for a suitable photo of Eden Pipe band, I stumbled on a picture - previously unknown to me - and I could hardly believe my eyes.

In 1953, on a summer Saturday at the coronation of Elizabeth II, two pipers from the Star of Eden Pipe band were preparing to lead a school parade from the front of Eden Primary School across to the Eden playing fields behind the Mission Hall. There we were, preparing to go to the celebrations Noah-style, two-by-two. First I spotted the McAllister twin girls in the front. They were in my class, and in later years became a formidable challenge to date as they were inseparable and identical. Then, beside our teacher Miss Kernoghan, there we were - Eric with the sandy hair and white shirt, and me in my Sunday shirt and jacket, heading up the boys. The memories this brought flooding back included us all getting a Coronation Mug in the 'field' and Eric winning a prize of a model 'golden' Coronation coach complete with footmen and six horses. That coach sat on display in the Glynn's house for years until they flitted to Ballyclare, and then I lost touch after they moved to Bangor, county Down.

I did bump into Eric at a big football match in Belfast when we were both in our 20s. He was wearing the scarf of the other team to mine, so I wasn't completely surprised when he turned down my offer of meeting up afterwards for a drink. "Why not?" I asked. "Well, I got saved", was his reply.

Last year I got news that Eric had died after 'a short illness'. Well, I'm glad I had that meeting in Belfast, for it was a different story back in those early days when we went to the 'Tuesday Night' meeting in the Wilson Memorial Hall in Eden and been spell-bound by the stories of the bravery of the African Missionaries. On the walk home after to Boneybefore I said to Eric, "If you got saved, would you go out thonder to die for Jesus?" He laughed and said, "Na".

I think that night was the first time I got saved myself, having backslid and gone forward again many times since. It has always bugged me a bit that I never had the flashing lights, but more a climbing, step-by-step process.

It might all be coincidence, but only a few months ago now I was talking with a friend who was in the terminal stages of cancer about this very issue. "Surely you can only get saved once", he insisted. "But if you can't give a time and a date like other folk?" I prodded, for I couldn't remember any time before those early primary-school and Mission Hall days in Eden. "It disnae matter if you can't," he said, "God minds the date".

When I look at that photo taken in 1953, I can't help thinking the Queen wasn't the only one to get a crown that year.
Posted by Philip Robinson at 01:56 No comments: