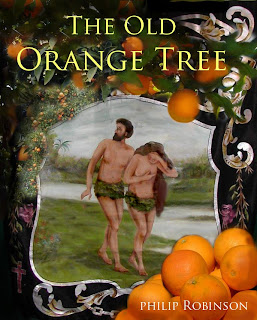 
'Young Samuel Hamilton came from the north of Ireland and so did his wife. He was he son of small farmers, neither rich nor poor, who had lived on one landhold for many hundreds of years . Samuel and Liza Hamilton got all of their children raised and well towards adulthood before the turn of the century ... Samuel sunk well after well and could not find water on his own land.
'I'll dig your wells for you if I have to drive my rig to the black center of the earth. I'll squeeze water out like the juice of an orange.'
John Steinbeck: East of Eden, 1952.

‘The world’, said Esther Hamilton to her two youngest children, ‘isnae perfect roon, but mair the shape o’ an orange’. She held the treat in her hand up in front of their faces, knowing that a child always learns best when waiting like a clever pup for its reward. Still holding the orange up like a floating planet above the heads of her captivated audience, she produced a knitting needle from the knife box on the wall and plunged it through. ‘An’ if yer granda dug a wal, an’ kep’ on diggin’, - he would come oot the ither side o’ the world, like that!’

‘Well, that’s enough o’ that’, said Esther, reaching again into the knife box for a sharp knife to cut the orange in two halves. Samuel’s sharp eyes picked out the bigger half, but his mother was ahead of him. She handed the big bit to Elsie and the other to Samuel.

‘What do you say, Samuel?’ she said, pulling it back out of his grabbing reach.

On the other side of the world, Samuel Hamilton was to dig many a well in what became known as Steinbeck country, east of ’s , before he became a granda himself. That was all a hundred years or so back, but there are still traces of them (wells and descendants), if you know where to look. One such well survives today in a long valley plain between the north Californian mountains ranges, its digger and its Scotch-Irish connections no longer minded. Without this well there would have been nothing built for three miles along the road into the nearest oasis town of Grove. As it is, the only legacy is a shack in such bad repair that a single blow from a repairing hammer might easily flatten the lot, along with a stunted tree which at daybreak boasts a cock and roosts some chickens, and between and around them a scattering of clutter as a warning that the site isn’t completely abandoned.

The King homestead was in no imminent danger of repair, for Joseph King and his son Joel were a perfect match for each other and the shack. But they were out early this Monday morning from first light. They had settled back down from the exertions of getting out of their stinking warm beds into a roadside hut made of old fruit packing cases, waiting for any swirl of dust that might signal passing trade. Their only apparent source of income was a roadside fruit stall. The only apparent source of fruit was an old arthritic orange tree crouching motionless by the well.

A pick-up truck with dirt-covered writing on its side pulled off the road opposite and swung round to face back into Orange Grove. Nobody stirred from the shelter or from the truck until the dust settled. Then a tall man in rough working denims and clean, short-sleeved shirt jumped down from the driver’s seat, using the door as a swing and leaving it open behind him in the swelling heat. He walked over towards the house as if he owned the place. But he was too clean and full of purpose to look like he belonged. In the still rising heat, there wasn’t even a creak from the joints of the tree. A hen scraiched down from its branches and another ran out from under a make-shift nest box that had a car door for a roof.

‘She’ll be out in a minute’, a voice snarled from inside the roadside shelter, back near the fruit stall. Joseph King emerged from its shade and stood as a wolf might eye its prey, waiting for the man to come back towards him.

Pat Mahood spoke with the confidence of a man that knew no fear. He could be just as curt and as hard as the next man. Joseph turned back and his son’s hand reached out a light brown re-used paper bag. ‘Four’, he replied without offering Pat the bag.

‘Gimme the lot, an’ three oranges’.

It was a ritual dance, for the both men knew that the last thing Pat Mahood needed to do was to drive out of Orange Grove to buy oranges, or fruit of any kind. And they both knew that none of the fruit on Joseph King’s stall came from the tree at the well. This exchange was a daily run out for Pat as he called for what he said was his mother’s crazy notion of fresh eggs. He put the bag in the truck and reached out another identical brown bag with the week-end’s unused bread in it. ‘For the hens’, he muttered as he handed it over to Joseph’s ungrateful snatch. They both knew the hens would probably be lucky to get even a few crusts, but the bread had to be treated as if it was waste. Joseph could only take it if it didn’t look like a hand-out, and he was doing the pest a favour even accepting it. And it had to be offered by Pat only after his money had been handed over for the eggs.

Anna came out from the house once she saw the transactions were complete. She was barely eighteen, but was rapidly becoming the double of her Mexican mother, just like she had looked when she died at the age of twenty seven. Pat didn’t acknowledge Anna when the young girl ran past behind him towards the truck with her head down.

‘Mind you an’ get back ‘fore six, Miss’, barked Joseph at his daughter as she climbed into the passenger seat. ‘Yes sir’, she said, keeping her head down.

Joseph spat crudely near Pat’s feet to remind him whose territory he was on. Pat ignored it, on the outside at least, and smiled as he nodded towards the shelter. ‘Joel want a ride into town too?’

‘Wanna hitch a ride into town, boy?’ Joseph said over is shoulder.

Joseph smiled scornfully out of one side of his mouth to register a small victory. Pat smiled back, shrugged his shoulders and left without a ‘thank-you’, a wave or a ‘have a nice day’ from either party.

Posted by Philip Robinson at 09:42 No comments:

Arriving at East of Eden

In the beginning, Steinbeck used 'The Salinas Valley' as the working title of East of Eden when he began to write it (simply 'S.V.' in his notes and letters to his friend and editor, Pascal Covici). His later idea of calling it 'Cain's Sign' was short-lived, but the reason he wanted a Biblical reference to Genesis in the title was fundamental to the story.

So the name of the book became a subject of correspondence with his editor "... you must know that I am stating my thesis and laying it out. And I am glad that I can use the oldest story in the world to be the design of the newest story for me".

Steinbeck said that this Genesis story was "the basis of all human neurosis - and if you take the fall along with it, you have the total of all the psychic troubles that can happen to a human".

When he wrote down the 16 verses of the story of Cain and Abel in his own hand, the title came to him along with a clearer vision of what he wanted to say.

"The story changes with flashing lights when you write it down. And I think I have a title at last, a beautiful title, EAST OF EDEN. And read the 16th verse to find it. And the Salinas Valley is surely East of Eden."

The next day the question was still burning on Steinbeck's mind:

... The reader I want will find the whole book illuminated by the discussion: just as I am.
And if this were just a discussion of Biblical lore, I would throw it out but it is not. It is using the Biblical story as a measure of ourselves."

So East of Eden as a title was born, and the central metaphor of the story blossomed with a new life.
Posted by Philip Robinson at 05:37 No comments:

Genesis of a novel (East of Eden)

When John Steinbeck was writing his first novel, East of Eden, he kept a notebook of letters to his editor. From these it seems that well into the second part of the book, he had intended to call it 'Cain's Sign'. Doesn't quite have the same ring!
But why? Here's what the man says himself:
"I thought about the book a great deal yesterday - what it is about and what its title should be. It is not local. It is not primarily about the Salinas valley nor local people. Therefore it should have a general title. Now - its framework roots from that powerful, profound and perplexing story in Genesis of Cain and Abel. There is much of it I don't understand. Furthermore it is very short, but this story with its implications has made a deeper mark in people than any other save possibly the story of the Tree of Life and original sin. ... With this in mind I went back to Genesis ...
The punishment of Cain is a strange and perplexing one. Out of Eve's sin came love and death. Cain invented murder and he is punished by life and protection. The mark put on him is not placed there to punish him but to protect him. Have you ever thought of that? And this is the best known mark in the world. so I suggest as a title for my book Cain Sign. ... What do you think of it?"
Posted by Philip Robinson at 12:52 1 comment: