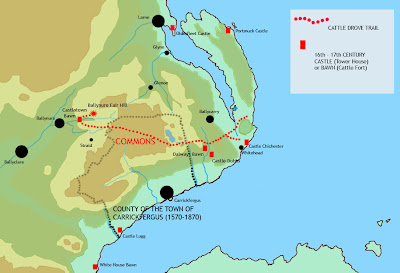 Why was Dalway’s Bawn built?

We know when, (it was shortly after 1608), and who by, (a Captain John Dalway who arrived at Carrickfergus from England in 1573 as part of the Earl of Essex’s plan for a plantation in east Antrim). But its purpose has long been a bit of a mystery, especially since it wasn’t built until 30 years after John Dalway first settled in the area.

By 1608 when Dalway received a fresh grant of his lands from James I, these ‘bawns’ were being written in as a requirement to all the official Ulster Plantation grants in west Ulster. Indeed the requirement for Dalway to build a bawn seems to have specified for his lands on the other side of Carrickfergus, at Ballynure, and not for the lands to the east of the county.

The theory of these ‘bawns’ was that they could provide not only a fortified enclosure for the Plantation landlord’s dwelling, but also a defensive retreat for tenants and their livestock when under attack from the ‘native Irish’. Given that the main threat to the settlers came from cattle raiding, it is significant that the word ‘bawn’ is an Anglicisation of the Irish bodhun: ‘bo’ (cow) and ‘dun’ (fort).

But Dalway’s Bawn is such a magnificent survival – much more impressive than almost any of the ‘official’ Plantation bawns (where the threat would have been more imminent) – that prestige and strategic defense (rather than the cattle trade) are the first things that spring to mind.

The choice of site seems to be explained by its location - just outside the medieval bailiwick or ‘County’ of Carrickfergus – partly to strengthen the eastern boundary of the county, and partly because the lands inside the county boundary were owned by the Burgers and Corporation of Carrickfergus and so not available for crown plantation grants – whether from Elizabeth I or James I.

But the story is more closely related to Dalway’s control of an important east Antrim cattle trade with Scotland, and a cattle drove trail which fed into the major drove roads of S.W. Scotland. This drove trail goes back at least to the late 1500s when it had been controlled by the Clandeboy O’Neills, and survived intact until the 1870s when the Commons of Carrickfergus were finally enclosed and leased as individual holdings.

Of course, when steam railways arrived in Carrickfergus and Larne about 1860, along with the large steam cattle-ships that began to sail from these ports about the same time, this meant that the fate of cattle droving was already sealed anyway.

I plan to set out this story in a number of blogs, beginning with the 'Irish' dimension in the 1500s. Up till the time that John Dalway first appeared in 1573, the Clandeboy O'Neill dynasty in east Antrim had been calling all the shots with the cattle trade in the hinterland of the Anglo-Norman colony of Carrickfergus.