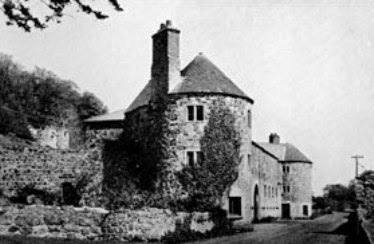 To find Dalways Bawn as I did as a boy, you would have to be wearing a Davy Crockett hat and be exploring the Copeland Water upstream in an attempt to find its source. The Copeland Water marks the eastern boundary of Eden village and the old medieval county of Carrickfergus. If you traced the river from Eden down towards the sea, it would take you to Swift's cottage after about 1/2 mile. But upstream, after more than a mile, another world is reached where Marshallstown, Dalways Bawn and Castle Dobbs together once defended the eastern approaches and cattle drove roads to and from Carrickfergus. If you want to reach the Bawn by road, take the main Larne Road from Carrickfergus, through Eden village and about 1/4 mile after you cross the Copeland Water, take a left turn up a road called 'Tongue Loanen'. This will take you straight past the front of Dalway's Bawn on the back road to Ballycarry.

When we first saw Dalways Bawn, we thought it looked like a wild west stockade, the sort we had seen Davy Crockett defend at the Alamo in Carrick picture-house, only this one was made of stone instead of timber. Well we weren't too far off the mark, for the scores of bawns built in the early 1600s during the Ulster Plantation were exactly that - cattle forts where the settlers could bring their cattle into when under attack from the native Irish (cattle-raids being the order of the day back then). The word 'bawn' is a corruption of the Irish bo-dun or 'cow-fort', and they were usually built with 4 corner towers as defensive 'flankers' and a dwelling house for the plantation landlord in the middle.

Dalway's Bawn was built in 1608 by John Dalway, although he had actually settled here some 30 years earlier. He first arrived in Ulster in 1573 along with Walter Devereaux, Earl of Essex, when Elizabeth's reputed 'favorite' attempted an early plantation in east Antrim. John Dalway married Jane MacBryan O'Neill a sister of the former local dynastic chief Shane MacBryan O'Neill. Their daughter Margaret Dalway then married John Dobbs, who had also come over with an Elizabethan English army in the 1590s and built the tower-house at Castle Dobbs just a few hundred yards away facing Dalways Bawn.

Both Dalways Bawn and Castle Dobbs were in Kilroot Parish - just east of the Copeland Water and the medieval County of Carrickfergus - for a very good reason. The land to the west of the river was not available for plantation as it had been in Anglo-Norman English hands since the 13th century! The 'Carrick' side of the Copeland Water at this point was - and is - known as 'Marshallstown'. In the 1600s it was held by Sir Baptist Jones, who is better known for his work as a Plantation land agent for the London Companies in Londonderry. His lease for Marshallstown showed that he also claimed a few hundred acres 'across the mearing' in Kilroot Parish. Today this is the tiny townland of 'Crossmary' between Dalways Bawn and Marshallstown.

Again, with our Davy Crockett hats on, we assumed that Marshallstown was where the 'Marshal' held out - after all Carrick had a Sheriff! Only in later years did I learn there was some truth in that too. In the 12th century an Anglo-Norman lord living in Carrickfergus was made 'Marshal' of the Earldom of Ulster. His name was Sir Roger de Copeland, and lands were set aside at the eastern end of the county by the town corporation for the support of his office. Not only was this the origin of Marshallstown, but he gave the Copeland Water its name too.

But the office of Marshall was no sinecure. The duties included securing the eastern boundaries, and controlling the cattle trade across it. Both these duties shifted to Dalways Bawn and Castle Dobbs in the 1600s when lowland Scots settlers poured into east Antrim.

And that is where the story comes down to my own family connections. My mother's family were 'Eslers' who had come over from Scotland in the 1600s as cattle and horse dealers, hill-farmers and cattle-drove 'facilitators'. It still is a fairly unusual name here and even by the 1860s, 90% of all the Eslers in Ireland lived in mid and east Antrim - on hill farms along the cattle drove routes to the port of Larne. Although I was born in Larne, our family moved near to Carrick when I was 2 years old. Recently I found a new 'branch' of these Eslers in Islandmagee, feeding the local cattle trade to Scotland from Portmuck. And then, to my amazement, I discovered a John Esler in 1860 as a tenant on a farm beside Dalways Bawn. Little did I think I was playing cowboys on the very lands where my mother's family had been acting out the real thing.

The farm on which John Esler lived at Dalways bawn belonged to an Alexander Hart, who then had lands in Crossmary and his main 'home farm' in 1860 was beside where I lived in Boneybefore. Victor and Ian Hart were at Eden Primary School with me, and I knew every field and hedge on their farm up 'Hart's Loanen'. But as that farm was not East of Eden, I'll leave that story for another day.

A postscript about the Davy Crockett hats. At Eden Primary school I sat beside Eric Glynn, who also lived beside me in Boneybefore. Eric had a kindly grannie known to us all as 'Grannie Hamilton'. Like all the old widows in those days she wore black from head to toe. But one of the kindliest acts I remember was in Eric's house playing an old 78 record with 'Davy Crockett' on one side and 'Robin Hood' on the other. Grannie Hamilton came into the room with a fox stole she had. She cut it in two and made two Davy Crockett hats for us. Eric of course got the one with the real fox's tail at the back, and I had only a fox leg with claw still attached on mine. All the same we really felt we had one up on the rest of the gang with their artificial shop-bought ones.
Posted by Philip Robinson at 12:58 8 comments: